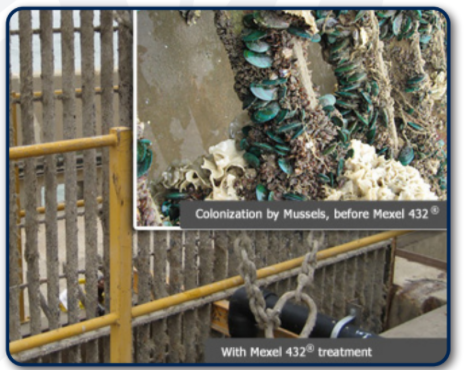 Mexel 432/0 has been proven across the globe as an effective treatment in the mitigation and prevention of macro fouling, in particular the growth and colonization of zebra and quagga mussels. Mexel 432/0 is an organic chemical substance that disappears rapidly in water due to the hydrophobic nature of the molecule, and its action to get to the surfaces of systems as fast as possible.  As a result the Mexel surface treatment films surface of systems which include macro fouling organisms.  Mexel’s typical dosage regimen is sublethal resulting in trans-location of macrofouling species vs death.

In comparison to other treatment programs such as hypochlorite or quaternary ammonia compounds, Mexel 432/0 has an extremely favorable treatment approach.  Mexel 432/0 does not need to be deactivated post treatment and, due to the low feed rate, is protective of the receiving water body as “end of pipe” toxicity is benign to the local biota.

Additionally, Mexel 432/0 provides micro-fouling benefits to include corrosion control and mud/silt dispersion.  The film layer created through the feed of Mexel 432/0 protects the surfaces of the system from the water itself, minimizing the need to control the quality of the water column while increasing system efficiency and simplifying system treatment.

Fill out the form below and we’ll get back to you within 48 hours!